Hachikō (ハチ公, November 10, 1923 – March 8, 1935) was a Japanese Akita dog remembered for his remarkable loyalty to his owner, Hidesaburō Ueno, for whom he continued to wait for over nine years following Ueno's death

Hachikō was born on November 10, 1923, at a farm near the city of Ōdate, Akita Prefecture. In 1924, Hidesaburō Ueno, a professor at the Tokyo Imperial University, brought him to live in Shibuya, Tokyo, as his pet. Hachikō would meet Ueno at Shibuya Station every day after his commute home. This continued until May 21, 1925, when Ueno died of a cerebral hemorrhage while at work. From then until his death on March 8, 1935, Hachikō would return to Shibuya Station every day to await Ueno's return. 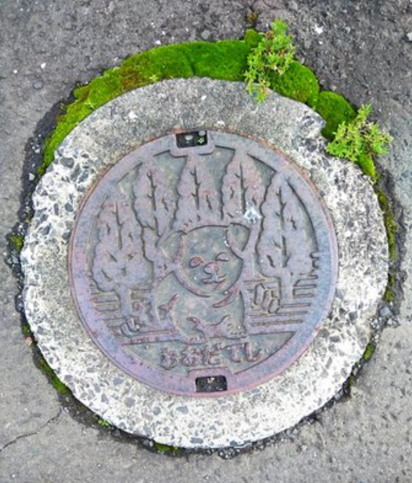 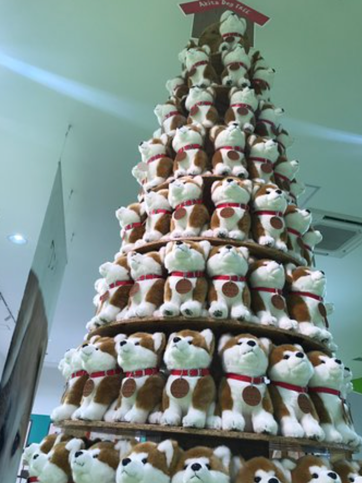 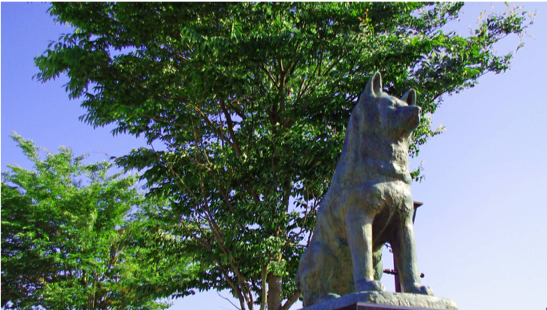 During his lifetime, the dog was held up in Japanese culture as an example of loyalty and fidelity. Well after his death, he continues to be remembered in worldwide popular culture, with statues, movies, books, and appearances in various media. Hachikō is known in Japanese as chūken Hachikō (忠犬ハチ公) "faithful dog Hachikō", hachi meaning "eight" and the suffix -kō indicating affection.

Hachiko, a golden brown Akita, was born on November 10, 1923 at a farm located in Ōdate, Akita Prefecture, Japan. In 1924, Hidesaburō Ueno, a professor in the agriculture department at the Tokyo Imperial University, took Hachikō as a pet and brought him to live in Shibuya, Tokyo. Ueno would commute daily to work, and Hachikō would leave the house to greet him at the end of each day at the nearby Shibuya Station. The pair continued the daily routine until May 21, 1925, when Ueno did not return. The professor had suffered a cerebral hemorrhage, while he was giving a lecture, and died without ever returning to the train station in which Hachikō waited. 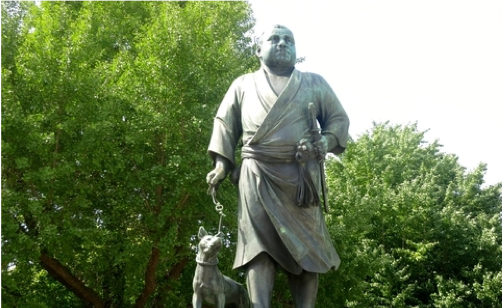 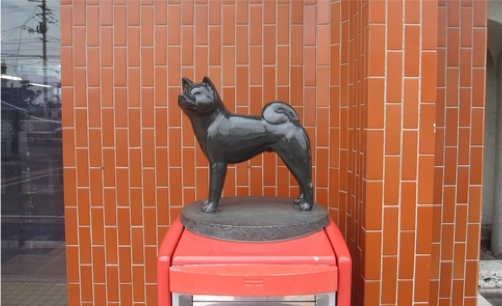 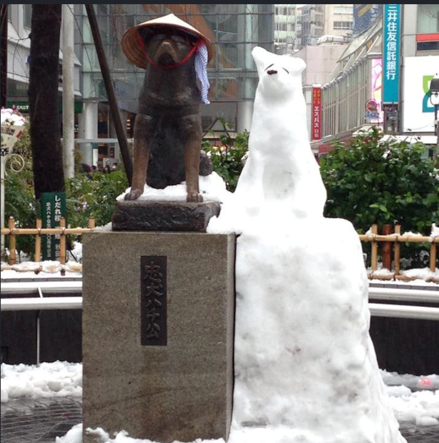 Each day, for the next nine years, nine months and fifteen days, Hachikō awaited Ueno's return, appearing precisely when the train was due at the station.

Hachikō attracted the attention of other commuters. Many of the people who frequented the Shibuya train station had seen Hachikō and Professor Ueno together each day. Initial reactions from the people, especially from those working at the station, were not necessarily friendly. However, after the first appearance of the article about him in Asahi Shimbun on October 4, 1932, people started to bring Hachikō treats and food to nourish him during his wait. 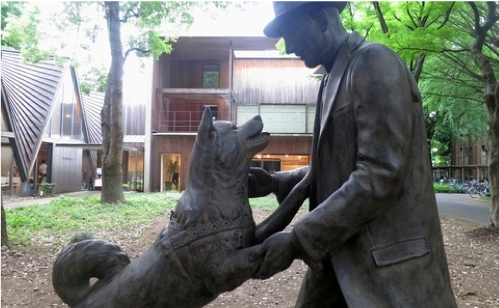 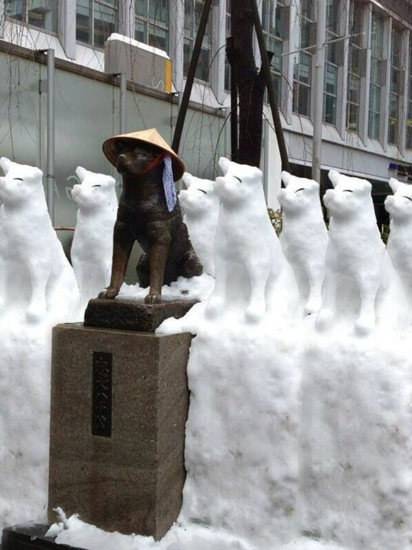 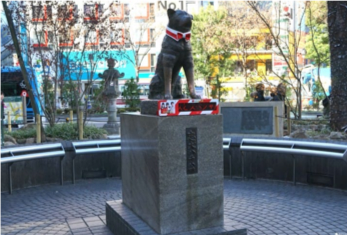 One of Ueno's students, Hirokichi Saito, who developed expertise on the Akita breed, saw the dog at the station and followed him to the home of Ueno's former gardener, Kuzaboro Kobayashi, where he learned the history of Hachikō's life. Shortly after the meeting, the former student published a documented census of Akitas in Japan. His research found only 30 purebred Akitas remaining, including Hachikō from Shibuya Station.

He returned frequently to visit Hachikō, and over the years he published several articles about the dog's remarkable loyalty. In 1932, one of his articles, published in Asahi Shimbun, placed the dog in the national spotlight.

Hachikō became a national sensation. His faithfulness to his master's memory impressed the people of Japan as a spirit of family loyalty to which all should strive to achieve. Teachers and parents used Hachikō's vigil as an example for children to follow. A well-known Japanese artist rendered a sculpture of the dog, and throughout the country, a new awareness of the Akita breed grew.

Eventually, Hachikō's legendary faithfulness became a national symbol of loyalty, particularly to the person and institution of Emperors. 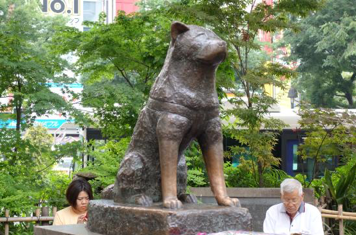 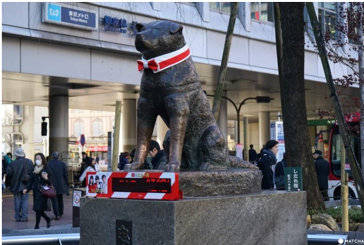 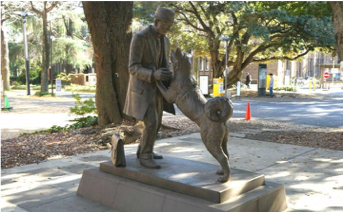 Hachikō died on March 8, 1935 at the age of 11. He was found on a street in Shibuya. In March 2011, scientists finally settled the cause of death of Hachikō: the dog had both terminal cancer and a filaria infection. There were also four yakitori skewers in Hachikō's stomach, but the skewers did not damage his stomach nor cause his death.

In April 1934, a bronze statue based in his likeness sculpted by Teru Ando was erected at Shibuya Station. The statue was recycled for the war effort during World War II. In 1948, Takeshi Ando (son of the original artist) made a second statue. The new statue, which was erected in August 1948, still stands and is a popular meeting spot. The station entrance near this statue is named "Hachikō-guchi", meaning "The Hachikō Entrance/Exit", and is one of Shibuya Station's five exits.

A similar statue stands in Hachikō's hometown, in front of Ōdate Station. In 2004, a new statue of Hachikō was erected in front of the Akita Dog Museum in Odate, Japan.

After the release of the American movie Hachi: A Dog's Tale (2009) filmed in Woonsocket, Rhode Island, the Japanese Consulate in the United States helped the Blackstone Valley Tourism Council and the city of Woonsocket to unveil an identical statue of Hachikō at the Woonsocket Depot Square, which was the location of the "Bedridge" train station featured in the movie.

On March 9, 2015, the Faculty of Agriculture of the University of Tokyo unveiled a bronze statue depicting Ueno returning to meet Hachikō at the University of Tokyo, Japan to commemorate the 80th anniversary of Hachikō's death. The statue was sculpted by Tsutomu Ueda from Nagoya and depicts a very excited Hachikō jumping up to greet his master at the end of a workday. Ueno is dressed in a hat, suit, and trench coat, with his briefcase placed on the ground. Hachikō wears a studded harness as seen in his last photos. 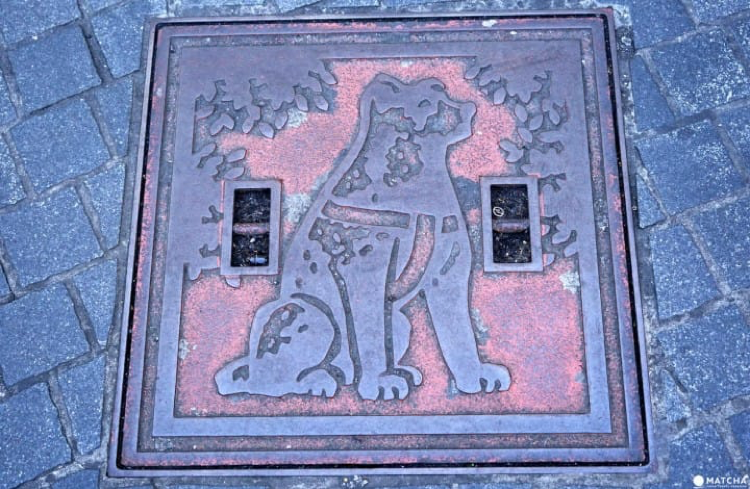 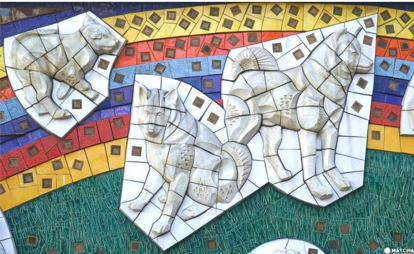 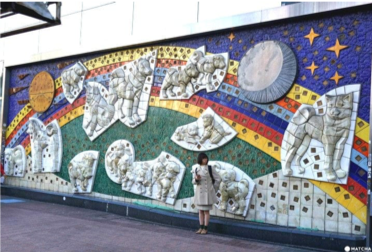 Annual ceremony
March 8, 1936, one year anniversary of Hachiko's death
Each year on March 8, Hachikō's devotion is honored with a solemn ceremony of remembrance at Tokyo's Shibuya railroad station. Hundreds of dog lovers often turn out to honor his memory and loyalty.

Hachikō's bark
In 1994, Nippon Cultural Broadcasting in Japan was able to lift a recording of Hachikō barking from an old record that had been broken into several pieces. A huge advertising campaign ensued and on Saturday, May 28, 1994, 59 years after his death, millions of radio listeners tuned in to hear Hachikō bark. 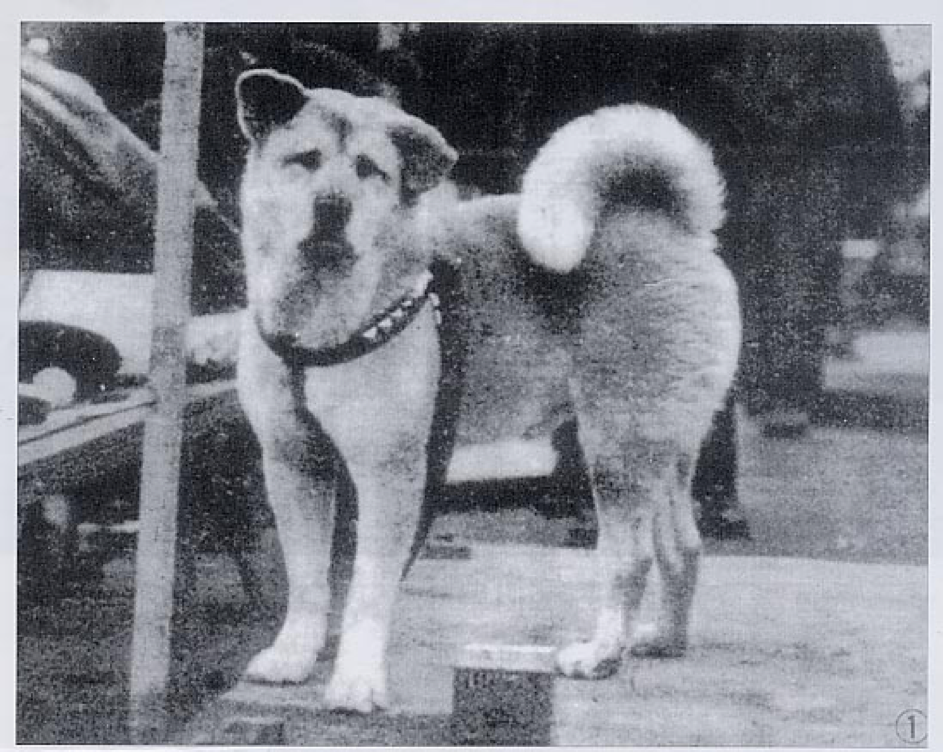 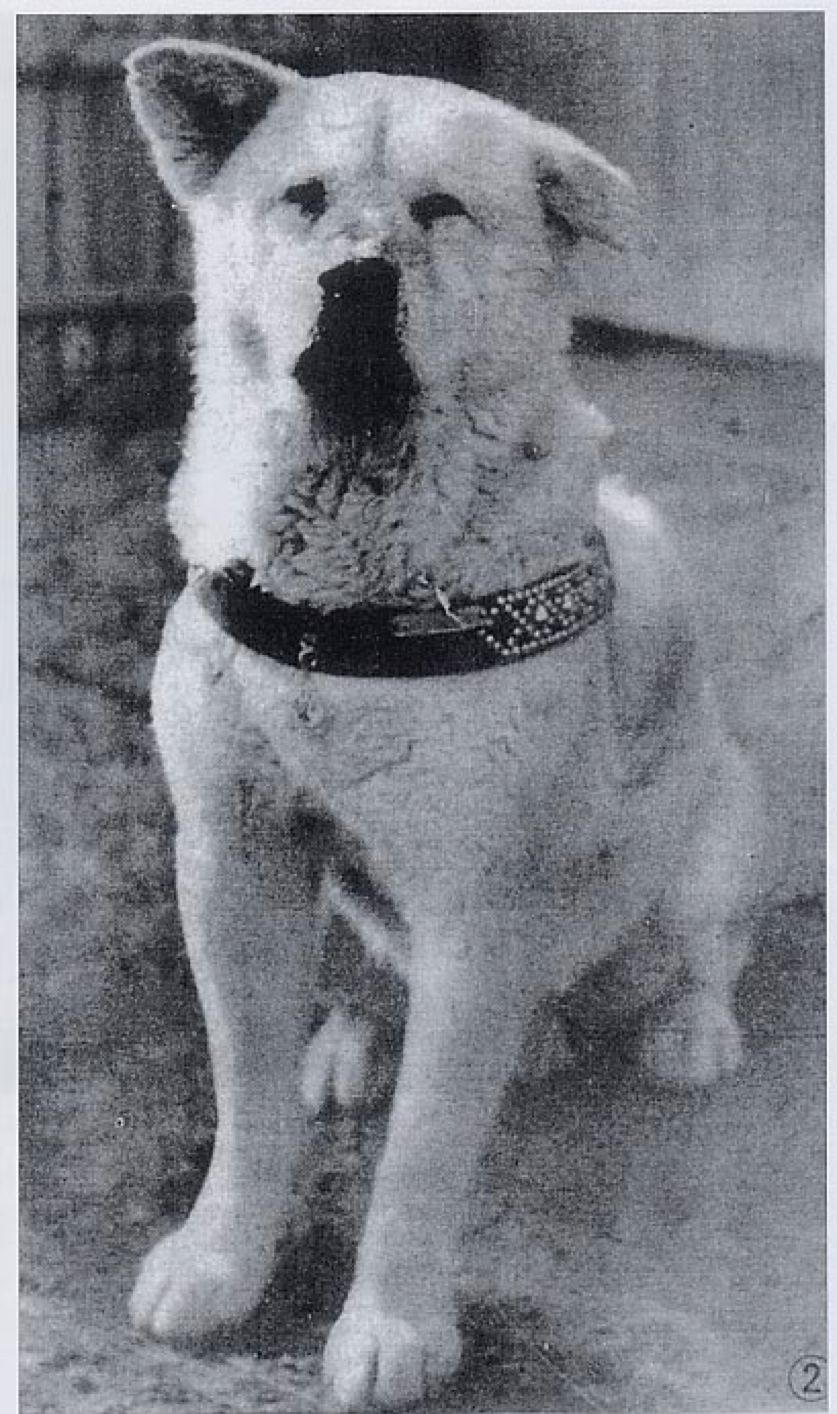 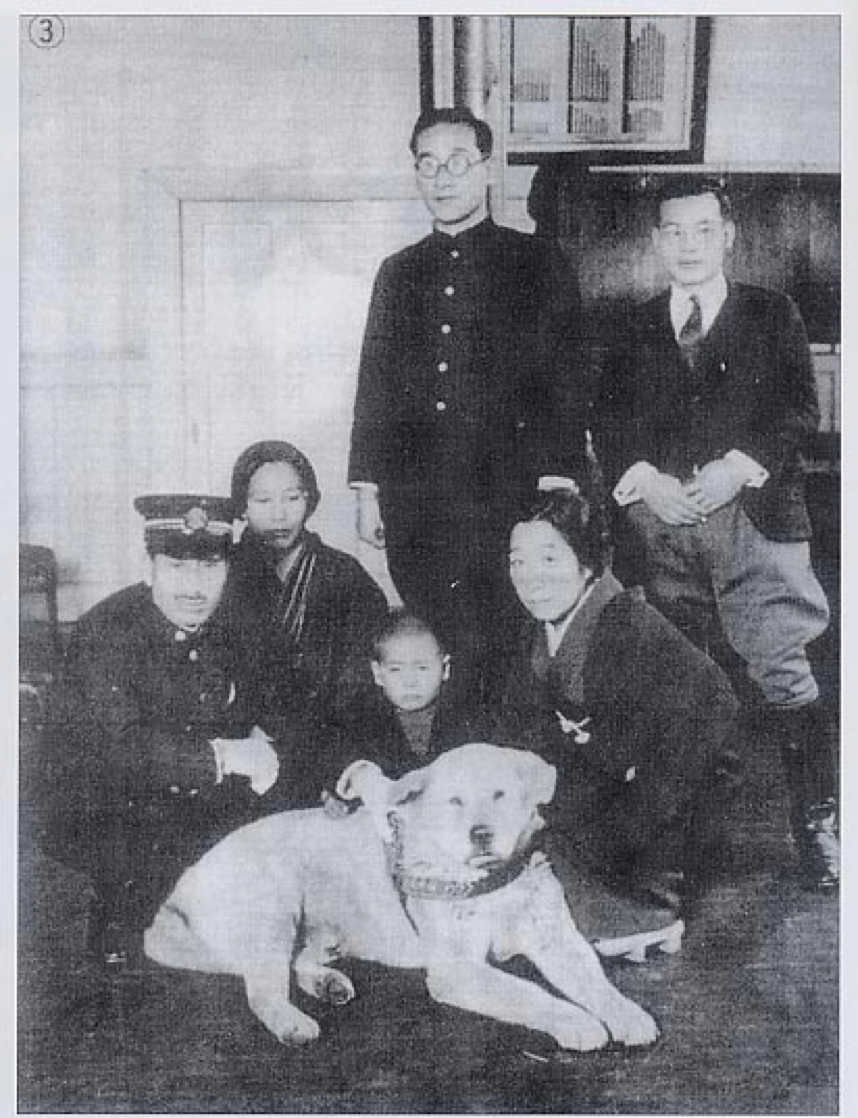 One year before his death 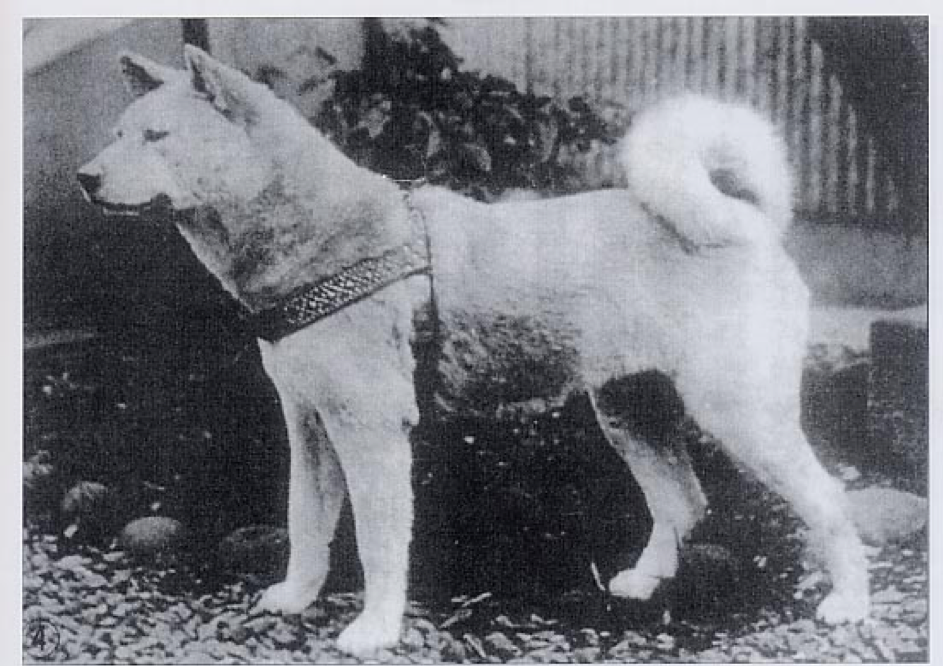 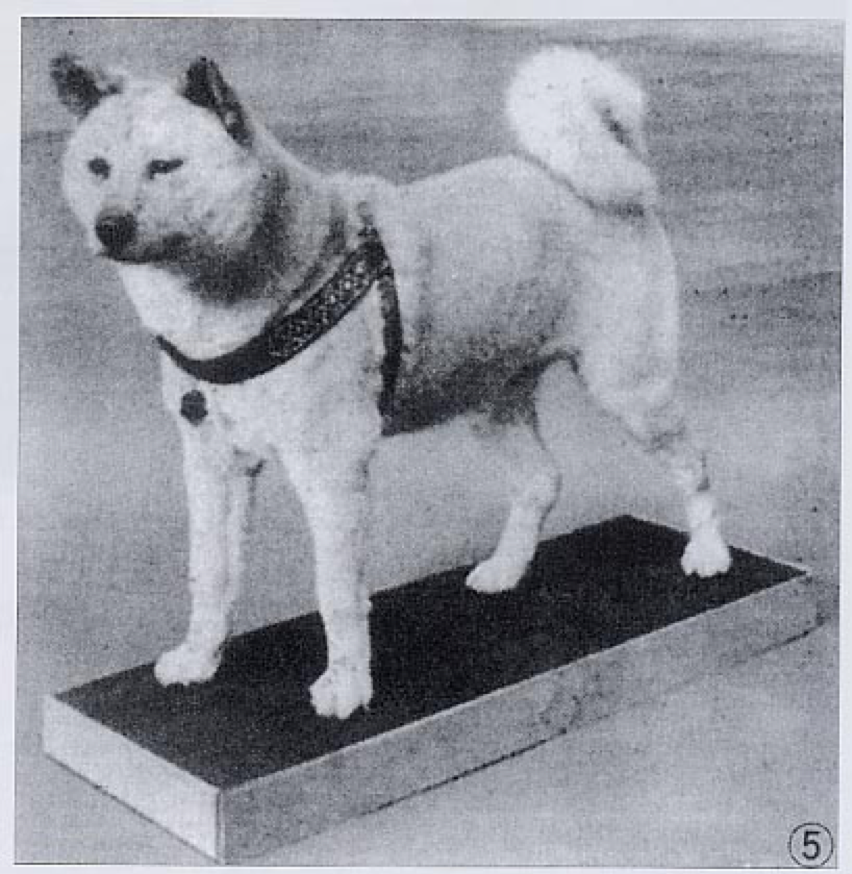